Two-Tyred: The Story of Pushbike Paul

Despite acting for many Macks’ clients who’ve been involved in accidents while commuting to work on two wheels, I finally decided to take the plunge and give cycling a go myself.

After booking up to ride across the country, a challenging 151 miles from Walney to Wear, to raise money for Prostate Cancer charities, it was time to blow the cobwebs off the bike that had been laid up in the shed for a couple of years.

I have to say that although I already know the route to our Darlington office well, as I drive it daily, I was filled with trepidation at the thought of battling with the cars, vans and buses, not to mention juddering juggernauts, along my journey.

In the weeks leading up to my first trip I made enquiries with Stockton and Darlington Borough Councils, the local authorities that cover my route, and they helpfully provided maps, both online and by post, identifying available cycle routes. I was concerned, however, that there remained sections of my route that would involve mixing it with the big boys.

I knew extreme care would be required, not just with the actual journey, but in my preparations as well. I needed to ensure my route was carefully planned, that I had the necessary safety gear, and finally, that my bike was properly serviced.

A visit to Halfords ensured my machine was well-oiled and raring to go. And after a trip to Aldi I was kitted out with all the hi-vis clothing and protective essentials I needed.

Finally, a quick scan of my will ensured all was up to date for the family’s needs, should the worst happen on my travels. Not a very cheery thought, but I’ve learned over the years that it’s a vital one, nonetheless!

Being conscious of the fact that cycling keeps you fit as well as saving money on commuting, I also decided to update my diary with my current weight, just to see if my new-found mode of travel helped me shed some of the excess baggage I’ve accrued since turning 40.

And so to my diary, which I intend to update weekly with a brief outline of my experiences while travelling to and from work…

9:30am: Decided to sort bike and have a practice run to and from work – hopefully the traffic will be quieter than a workday.

10am: After finding the bike (a Ridgeback bought 1999) at the back of the garage looking sorry for itself, headed straight to Halfords for a service. Looks like new!

11am: Onto the scales. A strapping 15 stones and six pounds. Concerned I may blow the tyres – weight better than last year, but still could do with losing a stone.

11:30am: Examined bike route. Put map down and had second thoughts. It’s a long way (all of seven miles)! Dare I climb onto the bus carrying my bike on return journey?

2pm to 3pm: Long Newton to Darlington along a variety of some fairly quiet country roads and some very busy sections in the town centre, but overall an uneventful first trip taken at a leisurely speed.

3:15pm to 4pm: The return journey was quicker, as I pushed on a little but still not at “race pace”, more of an installation lap. However, I became more and more aware of larger vehicles as they passed, not least because of how close some got to me as they did so, even though the section of the road was wide. “Not to worry,” I thought, “I’m sure they know I’m here…” Home safe.

4:15pm: Bike checked over and hi-vis stuff off. Reflected on a successful dry run, and indeed it was dry, so I still have the rain and wind to look forward to as we move deeper into winter.

4:30pm: Decided to make my first real journey to work on November 1. 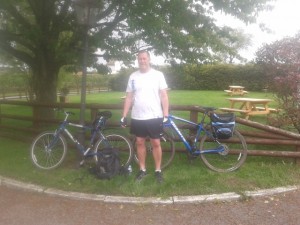 Be prepared, they said. So we’ve been training and have seen some wonderful North East countryside over the last two months. Some days have been harder than others, but even the toughest won’t compare to feeling when you get up the next morning and have to start all over again.

I’m not sure my butt-cheeks will survive but to give it a chance I have three gel seats on top of each other, padded underwear, padded cycle shorts (not a good look for me) and anti-inflammatories pills if needed.

Andy’s buddy is driving us over to Barrow-in-Furness at the crack of dawn on Friday. We’ll do it over four days, so it hopefully won’t be too challenging. We’ll end up on the opposite side of the world, well, the country anyway, to dip our front tyres in the sea in Sunderland.

A really nice client who I acted for on a cycle claim sent me four gel energy sachets and a postcard of him doing a proper bike ride in the mountains in France. Hopefully, the sachets will help get me over the line.

My main motivation is to raise some money for Prostate Cancer and any offers of sponsorship, no matter how small, are being gratefully received. 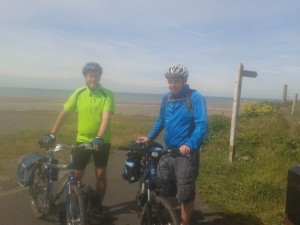 Daunting. We were eternally grateful to Andy’s pal, Paddy, who drove us across to Walney Island. He was great company and helped us feel relaxed at a stressful time.

Having set off at around 8.30am, we were on t’otherside by 10.30am. I’m not sure if we were trying to put off the inevitable, but it took us no less than half-an-hour to get two bikes and two rucksacks out of the van and walk 50 yards to the start!

When we set off after a quick photo shoot – neither the Walney Weekly nor the Cumbrian Cyclists’ Chronicle made it, they must have forgotten their press passes – our hopes of a quick getaway were dashed.

Panic set in as I couldn’t get out of first gear (a bit like Monday morning at work). Turned out the gear cable had disconnected. Quickly repaired and panic over.

The route was very good. Through the town and then quickly into countryside and past Furness Abbey. Up into the hills then down to Grange-over-Sands and eventually off to Kendal to end the day. It was a lovely sunny day and a nice ride, but we felt shattered as it was a long way (45 miles). 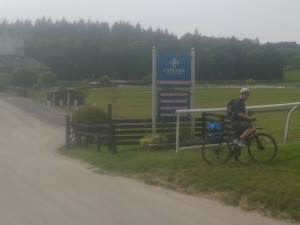 Horrendous. The first hour wasn’t bad but then the rain came and didn’t stop until we reached the Tan Hill Inn, famously the highest pub above sea level in the British Isles at 1,732 feet (528m). Ted Moult filmed the Everest Windows ads there in the 1980s and bands including the Arctic Monkeys have played there. Half-drowned, as we rode literally the last 50 yards, the sun came out. We were soaked right through. Soggy trainers. Soddy clothes. Soggy everything.

Before we got anywhere near the end of the day I saw a sign saying, “Tan Hill 6¼ miles”. Just at that moment, a 65-year-old lady sped past me. To say I felt my lowest ebb would be an understatement. To be honest, we walked most of the last couple of uphill miles, but it was worth it. A roaring log fire, a warming chicken curry and a comforting pint or two of Theakston’s Old Peculiar sorted us out. 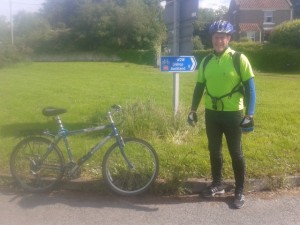 Rewarding. After a decent full English at Tan Hill, it was free-wheeling downhill for a good few miles and we were across the A66 before we knew it. Despite a challenging uphill through Bowes (Andy cycled all the way to the top – I walked some of it!) it was a breeze all the way to Barnard Castle. From there, back out to the countryside and to a lovely pub in the middle of nowhere for sarnies and a decent Strongbow or two. By this stage we’d racked up about 120 miles. Another 15 or so the next day and we’d be back at Andy’s in time for the F1. 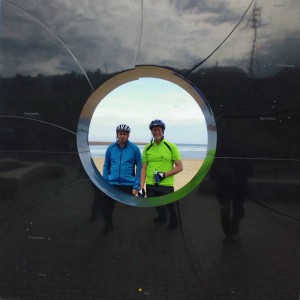 Triumphant. A difficult uphill start and then on to Bishop Auckland. An old railway track for miles provided an odd experience – mainly downhill but it felt flat due to the gravel-soil surface, so was quite a slog to Durham.

After Durham came some pretty ugly villages to be fair, and we scampered through them swiftly before reaching the A19 (after a pub stop at Pittington, of course). We had some more uphills to cope with before passing under windmills (too close for comfort) and then, eventually, seeing the sea on the horizon.

That was a moment to savour. Okay, it wasn’t The Med, but the end was in sight, nevertheless. At that point we still had about 15 miles to go but it was mainly downhill. I was pleasantly surprised at how smart the docks and marina was at Sunderland and the last mile or so was fantastic. We were met by a few of the family at the end. It was emotional.

My backside has nearly recovered. I’ve used up a year’s supply of Sudocrem. But my thighs have stopped throbbing now. And I can’t complain, I have legs after all. What an experience. I strongly recommend it.

Andy and I said on the train home the day we finished that we’d never do it again – but we’ve both since changed our minds. The beauty you see over the four days, and the sense of achievement, is worth the pain.

Again, many thanks to everyone who sponsored Andy and I. We were overwhelmed by the support we received and I smashed my £250 target. I shall visit my Dad’s tree on Father’s Day and tell him all about it.

This card will serve as a guide for what information an injured cyclist should take note of when they have been involved in a cycling accident and will allow them to contact us for expert independent legal advice.

Download a wallet-size version of our Cyclist Accident Report Card in PDF format.